Renaun Erickson did a great job to describe the usage of the Flash Builder Burrito plugin for BlackBerry Tablet OS SDK for Adobe AIR.

However, if you have already used Burrito as a plug-in version for Eclipse (and not as a standalone version), it will not find the new installed PlayBook SDK by default. Therefore you have to do a further step "by hand".

First of all: If you have not already installed Flash Builder Burrito as a plug-in for Eclipse (and again - not as a standalone version ;) ) follow the simple and great description by Jason here: "Burrito Feature: Plug-in Installer". To get more details of installing the PlayBook SDK and its Flash Builder 4 plug-in check the post "Install the BlackBerry Tablet OS SDK for Adobe AIR" at the BlackBarry Documentation as well.

After that just copy blackberry-tablet-sdk.link located in folder named "dropins" of Burritos standalone version to the folder "dropins" of your eclipse installation folder. That's all ;) 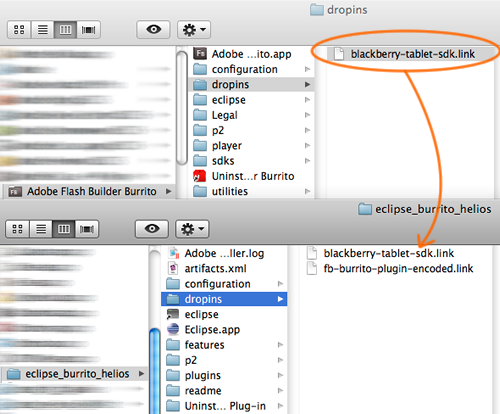